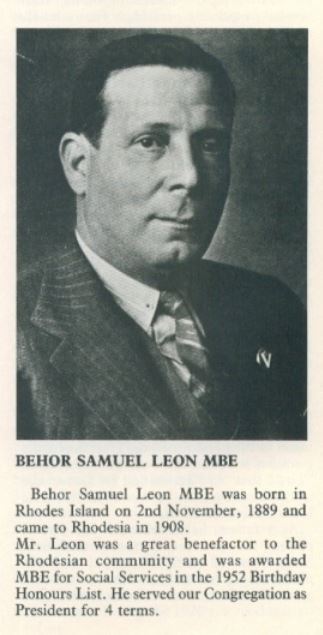 Up Mr Behor Samuel Leon was born in 1889 on the Island of Rhodes and came to what then was Rhodesia as a young man in 1908. He worked at various things for a number of years, until he had saved enough money to start his own businesses. He tried many things including farming, mining, trading stores etc, before going into the property market. Here his industrial and business concerns flourished and he became a comparatively wealthy man, he never married but was a keen sportsman, particularly with tennis and golf He was a founder member of the Wingate Country Club and Youth organisations could always rely on B. S. Leon for help.

His latter years saw him turn his attention to charitable Organisations and Commercial Institutions.

In July 1950 the Loyal Woman Guild lead by a Mrs Henry Smith initiated the idea of a home for the elderly men and woman, she got B. S. Leon interested in the project, and he opened a Trust Fund with a gift of 100 pounds sterling. This was followed in April 1951 with a gift of land. 20 acres of Mayfield Estate and in September 1952, the foundation of the present home was opened in the farm house with 7 elderly residents and it_became known as the B. S. Leon Jubilee Home for the elderly.

The home now specialises in care and treatment of me old and infirm members of society of both sex’s.

Over the years the home has expanded to what it is today, there are 100 +- residents, patients in rooms or in frail care wing in hospital.

In what is known as the Leon House, there are 42 separate rooms for female and male residents, also three small four bed wards, a dinning room, kitchen, and two communal lounges.

In 1962 the hospital wing was added on for frail care cases, there are three female wards with 36 beds , one male ward with 12 beds and two singles private rooms.

In 1970 the present laundry was added on, this caters for all the washing at the home. I might add here the three washing machines are the original ones from 1970, and are still being used 7 days a week, although at times its difficult to get spares when they break down. There are also two tumble dryers and two spin dryers of similar age as well as a small roller iron and 5 small irons.

There is 24 hour nursing in both sections of the home with fully qualified nursing sisters in charge and excellent assistants ( nursing aids) these are supervised by a qualified Matron and Deputy Matron, who endeavour to make die lives of the elderly people more bearable and acceptable in their latter years.

There is a fund raising committee made up of volunteers, some who have no connection with the home, they raise funds by having stalls at fetes, clothes, and book sales, also garage sales, etc, etc, etc. All items for sale have been donated and money raised goes to a certain project which would benefit all the residents in the home, certain organisations and commercial companies give a donation either in cash or in kind, but unfortunately due to the economy of the country these are getting less.

A plaque on the rear wall of the Sephardi Synagogue in Harare, was unveiled by Mr. B. S. Leon in June 1958. The plaque commemorates the consecration of the Sephardi synagogue forty-one years ago.  Mr. B. S. Leon was highly regarded  by the members of the congregation for his financial endeavours and his philanthropy towards his fellow man.  The Samuel Leon Hebrew School is named after his father. Born on the island of Rhodes he was very conscious of the well being of his fellow Jews.  The economy of the island could no longer support the 4000 strong Sephardi communities there, and with the clouds of the European war gathering on the horizon he assisted many of them to immigrate to Southern Rhodesia in the early 1920’s and 1930’s. Rhodes Island at that time was an Italian possession, and with the alliance between Mussolini and Hitler, the racial laws discriminating against Jews were implemented in 1938.  In August 1944 the Nazis deported the remaining 1767 Jews of which only 163 survived the horrors of Auschwitz.  Many families owe him a debt of gratitude. A good many members of the present congregation are in this country because of Behor Shumuel  Leon, who died in 1963, aged 74.

Although B. S.  Leon was a well to do man, having made money through mining and farming ventures, he did not marry. Whilst living in Gatooma and the Eiffel Flats he became a Freemason and was Past Master of the Gatooma Lodge.  In about 1954 he built the B. S. Leon Home for the Aged, and established the B. S. Leon Trust, of which he was Founder and President. Shortly after this he was honoured by Queen Elizabeth and received the O.B.E.  (Order of the British Empire) Today this Home is still operative and of the thirty eight members,  seven are Jewish.

The eldest is Mr. Solly Plein (95) followed by Mrs Marie Scemaria (87), Alegra Trevis who is the neice of